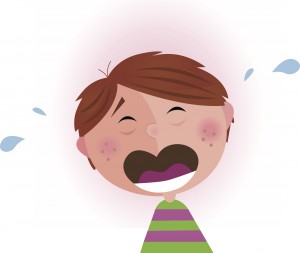 Perhaps nothing best exemplifies the “terrible two’s” than temper tantrums. A tantrum is a young child’s expression of frustration. Often it is because they don’t get what they want, but not always. It can also arise from struggling with a difficult task, feeling hungry or tired, or communication problems. Consider that most two year olds can understand much more than they can express in words.

Although tantrums are a part of development, there are tips to help prevent them:

Have daily routine. If a child knows when to expect to wake up, eat, nap, bathe, and sleep, they are less likely to fight it.

Plan ahead. Errands, get-togethers, and appointments are a part of life. Pack a small toy and snack in case your child becomes hungry or bored.

Encourage communication. If a child points to a sippy cup and is thirsty, sound out the word ‘cup’. If your child isn’t yet speaking, you can also teach them sign language for worse such as “drink”, “tired”, “I want.”

Give your child options. Instead of fighting over bathing, give them a choice. “Do you want to bathe now or in five minutes?” They are more likely to cooperate if it’s their decision.

Despite your best efforts, your child may still throw a tantrum. Some parents might feel that a child does this on purpose, but this is rarely the case. To a child, being really mad can feel scary, like they are out of control. Frustration is a part of life, and they are looking to you to teach them how to deal with it.

Dealing with tantrums depend on the situation and can vary from child to child. What works for one may not work for another. Some general strategies include:

Ignore the tantrum. When a child has lost control, this is not the time to be running around frantically, trying to find out what they want. Rewarding their tantrum by “giving in” will only reinforce the behavior. It is also not the time to scold them angrily. Displaying anger tells them that being angry is okay, the very behavior you want to stop. However, if a child starts doing something dangerous, such as throwing or breaking things, you should definitely step in.

Enforce a time out. Sending a child to their room or seating them in a chair can help them cool off. A general rule is one minute of time out for each year of age, but this can vary based on how long it takes a child to calm down. Avoid engaging or talking to the child while in time out. If you are in a public area, go to the car or a waiting area for the time out. However, if possible always return to the previous activity and location. Otherwise, a child may learn that a tantrum gets them out of an unwanted situation.

Acknowledge the child’s frustration. Although you do not want to engage a child while in a tantrum, you should go back afterwards to deal with their issue. You always want to show them that you care and are not disregarding them. Once they are calm, this is the time to say, “You’re sitting quietly now. Can you tell me again what you wanted?” Or teach them how to deal with the frustration. “Next time you get frustrated, take a deep breath, and close your eyes.”